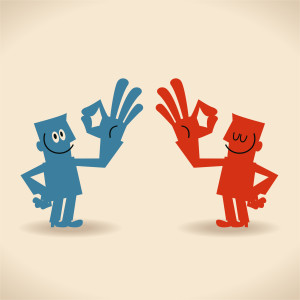 Through each experience, I have learned many lessons about how to run a business. How to create a repeatable process or system so I could stop reinventing the wheel, keep my sanity, and earn an income. The crazy thing is, while I had all of these big Lessons under my belt, I was hesitant to put them into action.

For example, for my branding clients I have consistently found myself doing more work than what we had agreed upon. It’s just my nature – I want the client to love the end result, and I’m happy to help them get there. But doing the extra revisions or coding an entire website instead of using a template, started to irk the heck out of me.

It wasn’t about the changes or the scope creep or the emails of panic in the middle of the night that finally had me losing my cool. It was the realization that my clients weren’t acting crazy, I was.

Right before the new year, I received a pretty innocuous email on a Saturday from a client, asking a question about something small. It annoyed.the.crap.out.of.me.

I was fuming the entire day and mumbling about how could they ask that? Didn’t they know it was Saturday and that I had already answered that question?

After a day of spiraling and reflecting on my reaction, that I also had a few times with previous client emails, I realized that I had to be the problem. I was getting annoyed because they should have known.

It sounds ridiculous writing about it, but it was a huge wake-up call for me. It was my fault that they had questions about “simple” things. That they wanted to redesign the entire site. That they decided that since I offered to hard-code the site from scratch to make it exactly what they wanted without an extra cost, that they would do it.

Even after the many client lessons that I thought I had learned, I hadn’t really learned a darn thing. I was still doing the same things that led to the behaviors that annoyed me (and probably my clients).

After this enlightenment and being talked down from the proverbial ledge, I made some changes to my business. I learned the lessons, and finally put them into action.

The first thing I did was create an agreement of work, or terms of service. I know – I’m beyond late to this party, but I always liked to go with the flow. I was still thinking like a freelancer, not a business owner.

So now, every client engagement has an agreement. It’s not full of legal mumbo jumbo, but it clearly states what is included in the price, what the steps are, what the process is, and expectations on both sides. Even my repeat clients are getting this for each engagement now!

I’m still nervous every time I hit send on the agreement. I still feel like I’m being too strict about it, and I still feel as though they aren’t going to sign it.

But they are signing it and most have commented on how clear the process is, what was included in the price, and finally understanding what comes next. I’ve had to refer back to it a few times along the way, and I feel like a jerk doing it, but I have to.

My business can’t continue to run and scale without having some structure and scope expectations in place.

I’m sure eventually I will run across someone who refuses to sign the agreement, or wants more out of the price than what was scoped out. And that’s ok. But now I will implement the lessons I have learned and remind myself that that person is probably not a great client match for me. They would probably be the ones sending me an annoying email or two.

Have you implemented an agreement? I’d love to hear how it has worked for you…