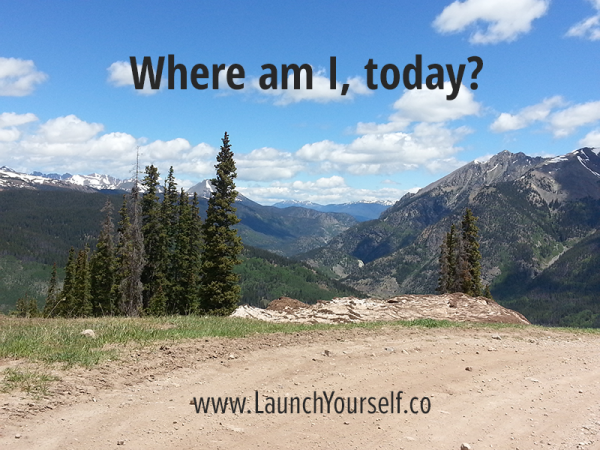 Where Are You, Today?

Home » Where Are You, Today?

You are going to stumble across many mid-year check-in posts this next week. It’s definitely that time of year – we’re halfway done with 2014 and things are probably not quite where you had hoped they would be when you started the year out.

You had goals! You had dreams! You were going to make things happen!

This won’t be another mid-year check-in post – not really. If you’re looking for that, you can go here.

Instead, a funny thing happened this year, completely by accident. I forgot to set goals. Forgot is a convenient word for not being able to decide what to focus on and being unable to commit to something for so long, that the year was already well in to the third month before I circled back to consider what I was doing.

It’s been a long time since I didn’t set an official direction for myself – intentionally or not. But what it has forced me to do, is check-in with myself a bit more often.

At the halfway mark of the year, instead of me seeing where I am according to my goals, I have often asked myself,

This question has become more of a mantra for me, popping up sometimes monthly, weekly, daily, and heck, hourly. Where are you in this moment? Are you where you want to be? Hoped you being? Doing the work you want to be doing?

To be honest, the answer hasn’t always been pretty. About a week ago while I was presenting a webinar about being an entrepreneur, someone asked me if I would do it again – was it all worth it? The day prior, my answer would have been a resounding NO. But in that moment, it was different – yes, I was doing the work I wanted to be doing and interacting with you is exactly where I wanted to be.

Without goals, I have found myself sometimes floundering and sometimes flourishing. More so then why I had an overall anchor for “my life.”

I have had more peaks and valleys in thought process or direction, then ever before (I’m still trying to figure out how to deal with the valleys a bit better). But I have also allowed certain things to unfold in different ways than ever before.

Regardless if you have goals set or if you don’t, we should all try and replace your story of “non-achievement” to something more graceful – “Where am I, today?”

Once we answer that, if it’s not where we want to be, how will you change it? What can do you in the next 30 minutes to shift you into that place?

A few weeks ago, that shift included some markers and a paint-by-number coloring book (I colored in a giraffe scene, in case you were wondering). On Saturday I took a crazy long hike because what I needed was to not be thinking about work (I can hardly walk today – the blisters are insane but that pic above, that’s from the hike!).

Where are you today – is bigger, it’s more. It’s a full-picture of you as a person, not just the sum of your parts or goals.

It’s stopping the downward spiral of comparison and measures of success – and turns where you are today, in this moment, into an instant reflection and action point.

I’ll admit it’s not perfect – not yet, at least. I still have a tendency to spiral at times, thankfully they are pretty innocent for the most part; and I absolutely have peaks and valleys. I am also even worse about looking back and reflecting on progress made (not a strong suit of mine to begin with, nevermind when I’m not actually tracking it).

But I do know that even when I get back on the goals train, which I’m pondering for the second half of 2014, that I will replace my “goal check-in” mentality with, “Where am I, today?”